We spent 2 months in Puerto Vallarta Mexico at the beginning of 2016 and looking back I wanted to jot down a few strange stories that stood out.

The one thing that’s hard to explain about Mexico is just how MANY taxis there are. Honestly no need for uber here because there are about 25 taxis just around every corner.

The other great thing about taxis in Mexico is the drivers. We’ve met some of the nicest people and had great conversations with so many of them. Talking about everything from their favorite restaurants to the cartels and corruption in their own neighborhood (but how safe it is… I was confused).

Sayulita was a 30 minute trip from where we stayed in Mexico, up through the jungle and mountains and back down to a bay on the ocean. Just a stunning drive.

That’s where we met our friend Martin. He not only drove us there but then waited for us in the town for 3 hours and took us back. We spent most of the time practicing our Spanish with him or Martin practicing his English with us.

We was especially excited to talk about his dog Dokkey (no idea if that’s how you spell it) and then wanted to show us a picture. Mind you we’re on a two lane road barreling through the mountains with cars and traffic everywhere.

Martin needed to get his glasses,
find his phone,
unlock his phone,
find his photos app,
scroll through his photos for 5 minutes,
narrowly avoid rear ending the car in front of us 6 times,
And land on the perfect picture of himself and Dokkey

Loosing the GoPro in the Ocean

I thought it’d be fun to put on the Go Pro head strap and jump through the waves on a day they were especially large. What I soon realized was that when jumping into a wave there’s a lot pressure and forces causing the camera to come off of my head and float away.

The chances of finding a Go Pro in the ocean are small.

So the panic when I came up out of the water and realized I no longer had the Go Pro (which wasn’t even mine) was very high. Until my wife about 25 feet closer to the shore felt something brush up against her leg… Grabbed it and pulled up a Go Pro.

The chances of this happening with a happy ending seem infinitely small, but the video captured was priceless.

Being told to jump in the ocean at Marietas

If you want to go on a touristy adventure in Puerto Vallarta Mexico you should check out the Marietas Eco Adventure by Vallarta Adventures. It’s honestly really great.

Editors Note: This is a spoiler so if you’re planning on going skip this section

After about an hour and a half on a boat taking you out to the Marietas islands it’s time to go to the hidden beach (and feeling slightly sick because it’s far to early in the morning). You’re promised photos (like the ones below) and tempted by the concept of a beach completely like anything you’ve ever been to.

You make it out to the island and suddenly the big boat is swarmed by little 15 foot boats all making their way up to the back of the bigger boat. Everyone is instructed how to where their life jackets and given some flippers and mask and told to get in the little boats.

The ocean isn’t exactly calm. There are waves, the water looks cold, and you’re huddled in a small boat now bouncing up and down in the waves slowly making our way toward… An entrance of some sort we could only conclude. 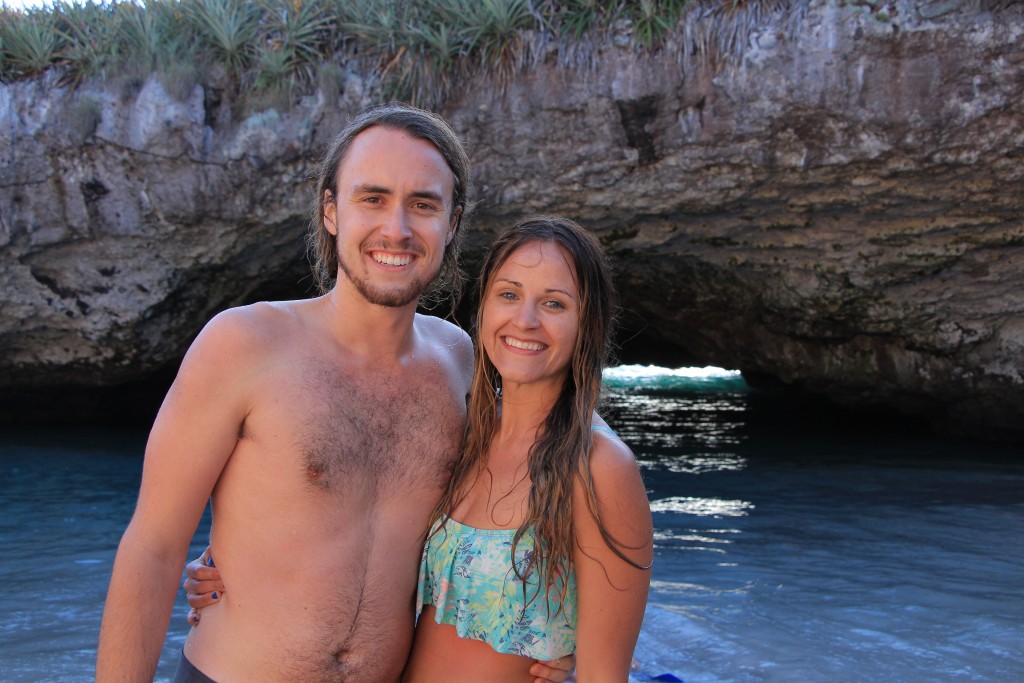 I love sitting in saunas. In Mexico we were lucky to have an amazing gym, sauna, and steam room at the condo building we stayed at.

We spent a good amount of time in the sauna. (apparently it helps with sun burn)

My wife went even more than me. For the first bit of time probably 4-5 times per week
That is until she found a scorpion in the sauna. As she opened the door to the sauan a tan scorpion dropped onto the wooden slats right in front of her feet.

And that was about it for the sauna.

America is a great country. I’m from here and spend most of my time here, but I do dislike the people on occasion. Where we lived in Mexico was a tourist area. That’s fine… not complaining about that.

But some Americans just make you cringe. (If anyone asks I’m from Canada).

For instance. Starbucks. Nice to get coffee and wifi in a familiar spot.

There was a lot of people at Starbucks. Sitting around, standing in line, typical Starbucks scene. So why do two overweight stereotypical Americans have to get on FaceTime and decide that they want to scream and shout at their kids.

You don’t have permission to act like a crazy idiot person. It’s a Starbucks… act like you’re in one.
And you don’t have to start crying when you’ve been gone for a day. You’ll be back in just a couple more days… Get over it and shut up so I can enjoy my Starbucks in peace.

We lived in a spot that required some mode of transport besides walking to get to restaurants, grocery story, shopping, etc. So we took A LOT of taxis and with the American dollar so strong that was not a problem.

But it get’s old after awhile. So we started looking at getting some bikes. But they cost $300 per month. Pretty crazy considering we could have bought a bike at Walmart for about $100.

So we gave the owner of the condo we were renting a call. And he was happy to send some bikes over for us.

I went out to meet the guy bringing the bikes at the gate and saw we might be in for a treat. The bikes looked a little smaller than normal. Quite a bit smaller.

End of story? We rode around Mexico on brightly colored children’s bicycles for the next month.

Sketchy internet all the time.

You might expect me to complain about sketchy internet. But that’s not what this is.

Is it stressful when you have scheduled calls on Skype? Yes. I will admit that it is.
But having no internet is the GREATEST productivity hack of all time.